by Monica
in Fibroid Mornings
0

I tried to put this entry in yesterday but just didn’t have it. So this is being written on the morning of Day 10. Yesterday went well. I survived Day 9 pretty easily. It was another long day of trying to complete some work I was unable to finish on Monday. I can’t remember experiencing any cravings for solid food yesterday. I did wish at dinner time that I was not off solids; but it wasn’t so much a craving as a conscious thought. I again made red bean rice for my husband and son’s dinner and I would have liked to try it. But like they used to say back when I was a kid growing up, it’s not as if rice is going out of style. There will always be rice and there will always be beans. So at some point after the 30 days (if I make it), I can indulge in some red bean rice.

I didn’t make anything yesterday in the blended food department. I got by on just cashew butter and honey-sweetened almond milk. I did attempt to blend a piece of avocado with some kale for dinner but that didn’t quite work out. Had to dump that down the garbage disposal.

As far as the condition of the fibroids and my stomach, everything is fine there. Nothing out of the ordinary. My cycle has finally started, so my stomach is adjusting itself preparing to settle into the post-cycle phase. The pre-cycle phase isn’t fun. And the fact that I go through it twice now that 2 cycles per month seems to be the rule is even less fun. But at least I know that it will ease once my cycle starts.

These days I’m not feeling nearly as frustrated about having fibroids as I used to. The main frustration for me was the change in my appearance. Looking pregnant when I’m not hasn’t been fun. But I think I’m finally coming around to a point of acceptance of my altered body. And I’m learning how not to dress for my fibroids. By that I mean to say, when dressing to go out I’ve made my fibroids the main focus for several years now. These days I’m ignoring the fibroids as much as possible. There are times when they cannot be ignored; but for the most part I’ve been wearing regular clothes instead of trying to fashion tents under which I can hide my body. 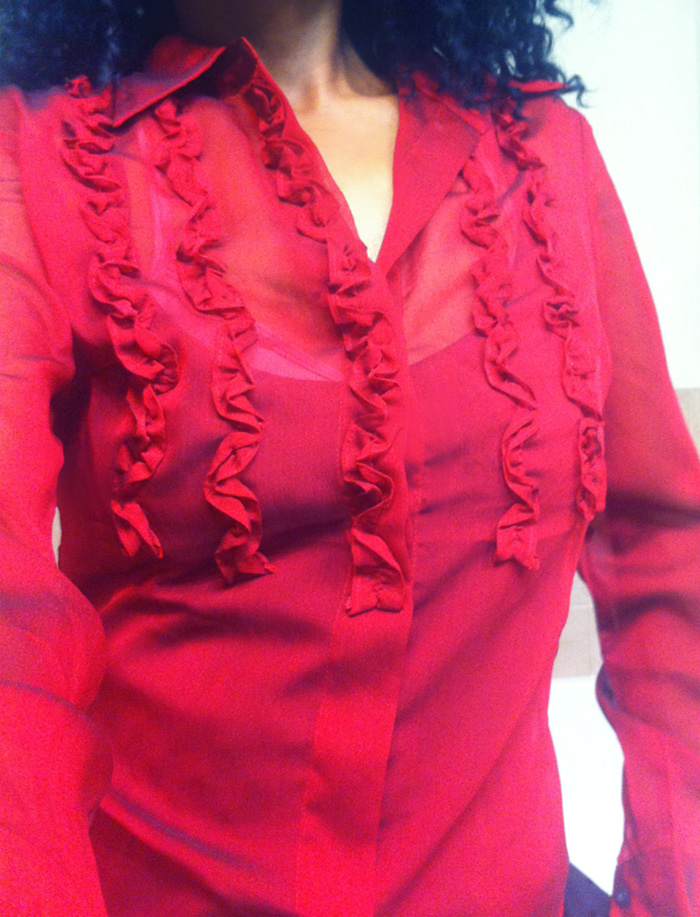 I have a fibroid-full belly. Okay. So what? My mother went through the same thing I’m going through and I never saw her try to hide her changed shape. I never saw her hang her head in shame because she was no longer considered to have a nice shape on account of having a swollen belly. She continued to dress nicely.  She wore normal-sized dresses. She wore belts at her waist. She didn’t dress in old-school maternity wear and adapt the mannerisms of a pregnant lady. She treated herself well. She did not dress with her purpose being to hide her stomach because she was so embarrassed about and ashamed of how she looked

I still do try to hide my stomach as much as possible if I can; but that is no longer my sole focus and purpose when putting an outfit together to go out (I have been getting out a little bit more though still nothing close to what is considered normal). I have realized I can still look nice (nice by my own personal style definition). I don’t have to try to disappear under many yards of cloth and hide myself for shame because I have a body that people will notice for all the wrong reasons. When all is said and done what is there to fear?