I made it through day 11 and Day 12 successfully. Today is the 13th day. I have 17 days to go. Day 12 wasn’t terribly difficult. The men brought pizza into the house for their dinner. I wasn’t much bothered by it as far as temptation goes. Usually the smell will make me wish I could have a slice but it didn’t do that yesterday. For dinner I had a mango blended in almond milk and fortified with nut butter. It wasn’t particularly tasty. I would have made a blended soup but I am out of everything except kale. I might make a trip to the grocery store today.

My no-solids consumption remains limited to nut butters, and blended soups and occasionally some blended fruits. I’ve been having dairy free ice cream to help ward off boredom and to treat myself. But I’ve been neglecting to pay attention to the sugar content. I’ve been avoiding sugar to the best of my ability so I’ll be having to say no to the dairy free ice cream unless I can find one that is also sugar free.

Like I said I didn’t blend any soups on Day 12. But I did get around to trying that kale zucchini yellow squash blended soup I mentioned on Day 10. I made it for dinner on Day 11.

If I don’t get out to the store today I’ll probably just try to see what I can put together with the rest of the kale, avocado and bell peppers. I have a hard time imagining the bell peppers will make for a good choice for blended soup but who knows?

Today is off to an okay start. I think I might have actually managed to get 8 hours of sleep last night. I’m hoping it’s the case. I can’t remember what time I went to bed. It’s rare when I am able to sleep more than 6 hours. Any time that happens I am filled with gratitude.

Whether or not I’ll make it to day 30 remains questionable. Especially if I can’t find something to eat when I go through spells of anxiety, stress or emotional lows. That’s the time when it’s hardest to stay the course. An impulse eating habit can be like an addiction. If you don’t resolve the trigger issues, you’re less likely to successfully overcome the addiction.

But I would have to say this has been a fairly good week as far as the management of my anxiety and stress and depression. I’ve been staying busy. I got dolled up yesterday to take some pictures for an editorial for another blog. The fibroids didn’t bother me in the least. My stomach has settled down some from last week and the week before (that pre-cycle bloating). It’s still protruding but I think I am finally at a point where I can work with it. 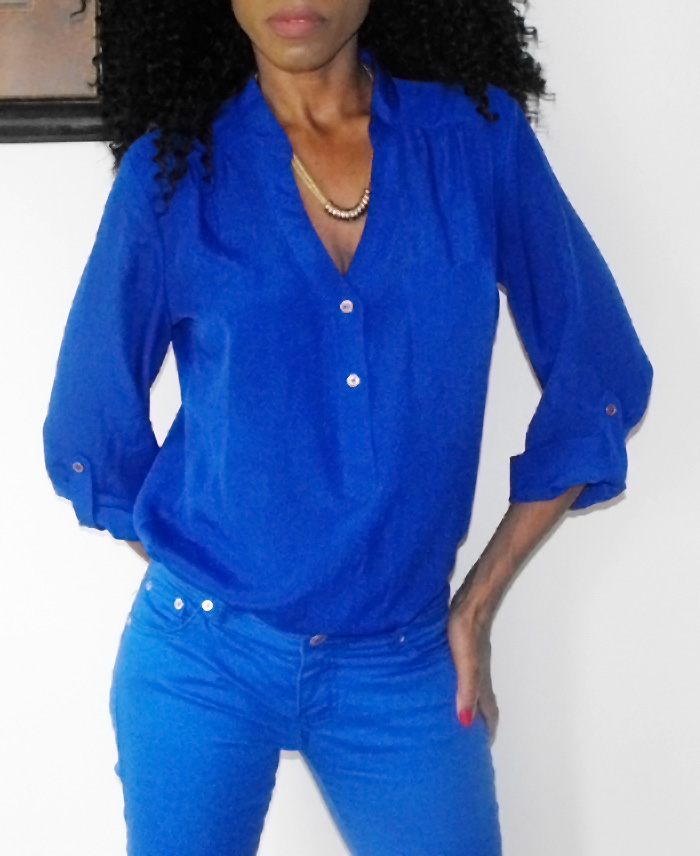 Dressing like this hasn’t been possible for years now. Or maybe it was possible but I was so hung up on being ashamed of my body that I chose to go the other route in my style. I was previously embracing the maternity look. Sometimes when out in public I’d even adapt that pregnant lady hand on belly stance to play along knowing people would look at me and think I was pregnant anyway.

These days I’m trying to come out of that mindset where I regard my stomach as something to hide. It’s a little bit easier to do that when it exits the pre-cycle phase.

I think the most important thing for me has been taking control over the things that are in my power to control. Eliminating foods that adversely affect my core at large, keeping up with exercise, working harder to manage my anxiety and stress, not indulging depression. I can’t tell anyone what is right for them; but I strongly recommend if you are looking 6 months pregnant or more that you start to pay attention to the over-all health of your core system. You could be dealing with additional issues and not just the fibroids. You could also be dealing with hormone issues related to menopause rather than to your fibroids. Since coming to that realization for myself my condition has been a lot easier to manage.

Speaking for myself, there was (and still is) a lot of ignorance about my body at this stage in life. Things started changing at around age 35 but I didn’t realize what was going on. I didn’t know that I should be expecting such drastic changes and that I should be adjusting my lifestyle accordingly. My fibroids didn’t have to get as big as they did get. I was between age 36 and 37 when I discovered them. I was doing sit-ups when I felt a bump. I went to the doctor and it was insanity from that point. My life quickly became a “fibroid life”.

I now know that I caused things to get out of control by not understanding what I was really dealing with. I figured I was a perfectly healthy person who just happened to have fibroids because I was genetically pre-disposed (mother, grandmother, some of my sisters). I looked at the fibroids as if they were isolated from everything else. I didn’t get that they were connected to a process. I didn’t understand that they were a symptom rather than a stand-alone problem. Again, I’m speaking for myself. But what I have concluded for myself about my particular situation is that all of the changes were connected to the same process of my body preparing itself to transition to the menopausal stage (It can take well over a decade for some women).

And I needed to be taking care of the internal environment of my body as necessary to enable it to go through the process as smoothly as possible. But I didn’t connect one thing to another. There were so many signs and so many symptoms. But I didn’t know they were all connected. I treated them like they were their own individual problem. And all the while I kept living the same way, eating the same foods not realizing that something I was eating could be feeding one problem which could impact another problem which in turn could impact yet another problem. I just kept feeding all of these different problems. And they just kept feeding off each other, keeping me spinning around in a crazy cycle.

The fibroids benefited from my ignorance of the fact that my body as was actively transitioning out of the child-bearing stage. I kept them thriving by keeping their environment well stocked with everything needed for them to thrive and grow. But I’m understanding it all better now. And the most powerful thing to come out of my ongoing enlightenment is the realization that there’s nothing wrong with me. This is all just part of the process of life. And I’m closer to the end of the transitional phase than to the middle. I know there’s new stuff waiting for me on the other side; but like all the women who came before me, those long gone and those who are right now dealing with what waits for me, I’ll be up to the task of handling it.