by Monica
in Fibroid Mornings
0

There is nothing on my mind right now. I’m sitting staring through the slats of the open blind at the window in front of my desk. It’s interesting that it’s already Wednesday. When you live like I do you sometimes lose track of the days. A lot happened between last Wednesday and today and yet, right this very minute none of it seems important. Some of the worse of it is already beginning to fade into the forgotten realm and at the time when it was happening it seemed so great in magnitude as to completely rock the foundation of my life.

I can hear some birds chirping outside my window right now. I wonder what it’s like being a bird? I wonder if birds suffer with depression or if there are such things as agoraphobic birds?

Another Sunday morning in the life

So that’s what a hot flash actually feels like

The chirping has stopped for the moment and I have picked up a book and read a quote that is attributed to Ralph Waldo Emerson. I am not sure I agree with all of it. I like the part about leaving the world a bit better whether it’s by leaving behind a healthy child, or a garden. And I also like the part about knowing that even one life has breathed easier because you have lived. But I’m not so sure about the part that mentions winning the respect of intelligent people and the appreciation of honest critics. I’m not big on philosophies espousing concern over people’s opinions even if they are suggesting that it’s a good thing when intelligent people respect you and honest critics appreciate you.

To laugh often and much; To win the respect of intelligent people and the affection of children; To earn the appreciation of honest critics and endure the betrayal of false friends; To appreciate beauty, to find the best in others; To leave the world a bit better, whether by a healthy child, a garden patch, or a redeemed social condition; To know even one life has breathed easier because you have lived. This is to have succeeded. Ralph Waldo Emerson

Sometimes intelligent people don’t respect you and honest critics don’t appreciate you because they don’t like you for arbitrary, superficial reasons that have nothing to do with you and everything to do with their personal prejudices and their perception of your reality. Our perception of other people’s reality is just that–our perception. We can be totally wrong about people but never know it because we never take the time to get to know who they really are. We just decide that our perception of them is their truth.

The picture of the bird in the tree was taken a short moment ago. I decided to take a picture of the tree I can see while sitting here typing. While I was zooming in I thought how nice it would be if I could find a bird in the tree (since I have been talking about the birds), and soon after thinking the thought one flew in. I took the picture sitting here in my chair looking through the blinds and my camera is a low quality camera that’s pretty much on it’s last leg so the picture is a bit blurry. Here’s another shot of the bird. This one’s even more blurry. 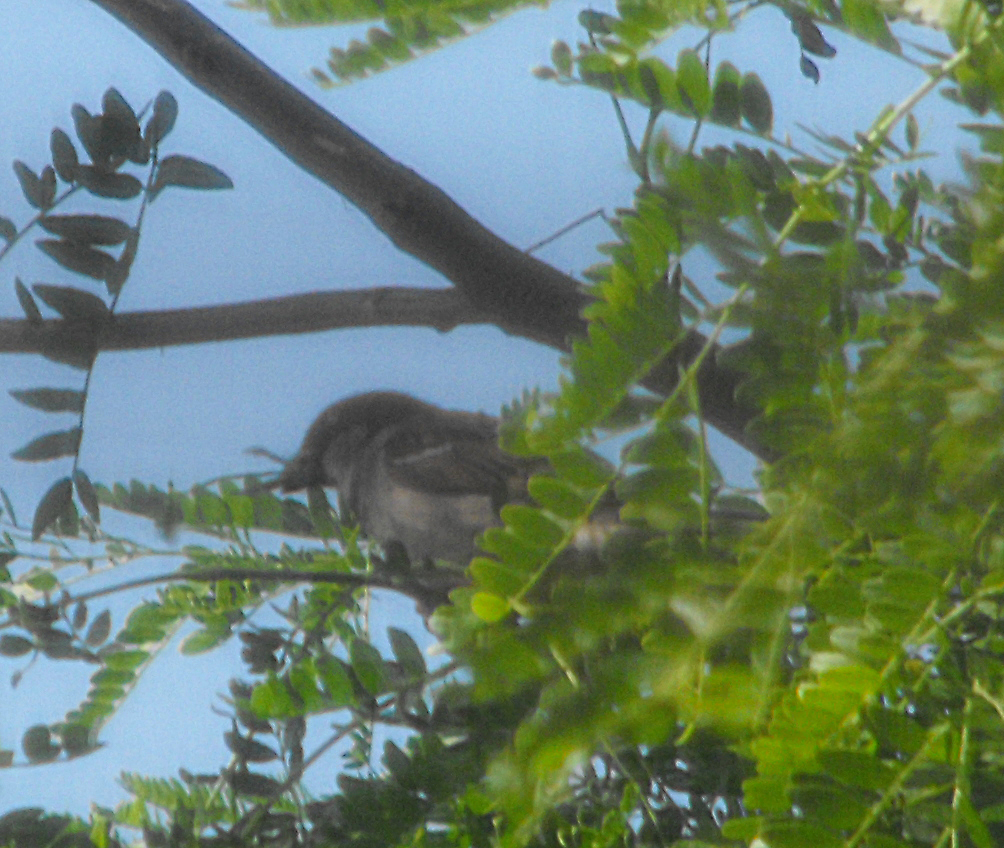 The silence I was enjoying is over now. The grounds maintenance crew have begun to mow the grass.

How I faced one of my fears today

Another Sunday morning in the life

So that’s what a hot flash actually feels like

How I faced one of my fears today