by Monica
in Shrinking Fibroids
2

It has been a while since my last update so I thought I would do one today. The status of my efforts to shrink my fibroids without surgery is that I am still not fibroid free after more than 2 years trying a number of approaches for getting rid of my fibroids using natural methods. By contrast, my sister who also had fibroids continues to remain fibroid free since having a myomectomy procedure done. I have another sister who had a hysterectomy to remove her fibroids and yet another sister who has fibroids but is one of those women who are not severely affected. She has had the fibroids since she was a teen. They expand her lower abdomen a little bit according to her but not to the extent of making her look pregnant. I appear to be the only one still suffering for my choice not to get the recommended hysterectomy.

It’s not like my situation is as bad as it was before or anything. For the most part I am still managing to keep my stomach from going back to where it was making me look like I was about ready to pop out a baby. The fibroids fluctuate in size depending upon a number of factors. The biggest factor appears to be eating solid foods for too many days in a row. My experience so far has been that I am able to keep my stomach from protruding too much if I avoid eating solid foods; but so far I haven’t been able keep to a juice fast for more than 14 days in a row; and I’ve found it difficult to start a new cycle once I’ve completed a fast and have been back eating solids for a week. I eventually get it done, but it can sometimes take a number of tries before I can successfully complete a fast of 5 or more days. It would be great if I could find something that works without requiring drastic lifestyle changes because those are kind of difficult to make; but at least I know that a juice fast will work to reset things when I fall too far off track. It doesn’t get rid of the fibroids, at least it hasn’t for me, but it has helped more than anything else I’ve tried; and not just by reducing the size of my stomach. It helps me mentally as well. I feel significantly less bogged down, more comfortable in my skin, more focused and balanced mentally and emotionally.

I have not been using apple cider vinegar, blackstrap molasses or any other of the things I’ve tried in the past. I’ve just been focusing on maintaining my fitness and trying to avoid consuming too much in the way of heavy food. When I can manage to get one to stick, I will do a juice fast.

If I were to be honest I’d have to say that I could do a lot better than I have been doing in recent months. Although I have continued to keep up with my fitness, I haven’t really been applying myself with the kind of focus and determined will that helped me get my stomach down to its where I could step out without having to worry that I looked pregnant. I have had days when I’ve consumed things I know I shouldn’t eat. I have had days when I’ve not bothered to try to fight my depression and have allowed stress to take over my life; and these things without doubt impact on my fibroids detrimentally.

All in all I still have a long way to go; but I remain at a better place than I was a year ago. I’m without question in better health; and my stomach is still smaller than it was a year ago even though it is bigger than it was 4 months ago. I haven’t entirely fallen off track. I haven’t fallen off track at all, I’ve just taken some steps backwards and haven’t been moving forward since taking those backward steps; but that is easy enough to fix. I just have to put one foot forward and start moving again, starting right this very minute.

I found a photo I took on April 30th 2013 to use with this post but never actually added. I have added it to the post today. There were some other pictures that I took on that day that when compared to my status today show plainly that my stomach had gotten flat enough to be easier to disguise. In the picture above you cannot tell I have any protrusion at all. But I do remember the day I took that photo so I can tell you that my stomach was not flat. It was just much flatter than it is at the present moment. I was also a bit smaller then than now.

The outfit I’m wearing in the picture (my rags) was worn so that I could do a comparison photo to another update I had done wearing the same outfit. Here are the pictures from that update. 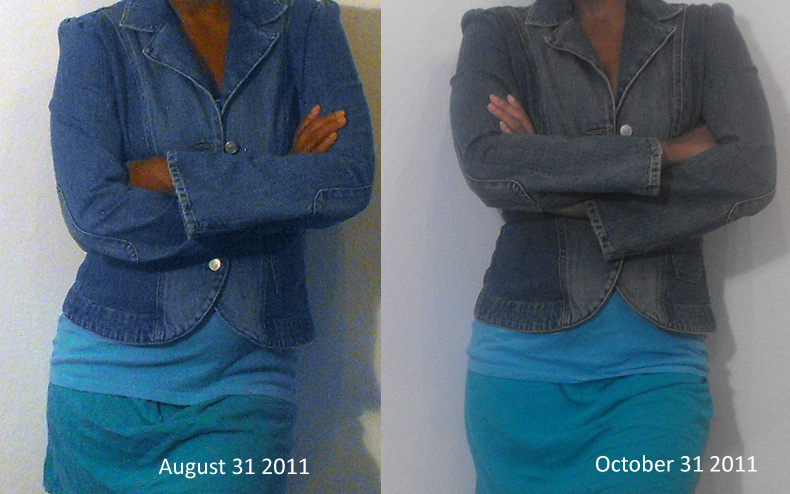 You can see that I had become smaller by April 2013. It would seem to suggest that maintaining a very small frame can help minimize the appearance of your fibroids; but as I mentioned in several other posts, my husband has a way of making me feel like I am not the least bit appealing when I fall under a certain size and I find it very difficult to feel good about myself when he gives me these disgusted looks and makes comments that put me down in an effort to prevent me from going back down to the size I used to be before all this stuff started. Aside from that, I have to eat. And to maintain the size that I used to be requires me to do what I used to do to stay that size; namely starve myself. I don’t think it’s a healthy thing for me to be starving myself so I can stay thin enough to be able to hide my stomach more easily. I don’t need to be playing around with eating disorders at this age. I went through that from my teens into my early thirties. At this point in my life I want to be healthy–mentally, emotionally and physically. So I don’t know. I’ll have to figure something out.