Shrinking fibroids naturally before and after picture

by Monica
in Shrinking Fibroids
2

It’s been a while since I have written an update on my progress with shrinking fibroids naturally. In my last set of updates I mentioned that I was attempting a 21 day juice fast. I got about 14 days done successfully but then I bailed. During the 14 days I saw incredible results. In one of my updates I mentioned that I was able to go out to the store wearing a t-shirt that I would not have worn previously because my stomach would have been protruding too much and people would have thought I was a good few months pregnant. The juice fasting had done such wonders that you could barely tell my stomach wasn’t flat.

Unfortunately along with the flatter appearance of my stomach, I was also starting to look extremely thin to where everyone was in my face with their concerns, particularly my husband who made me feel like I just wasn’t attractive anymore. He actually told me I had to chose between being scrawny and tired looking with a flat stomach or looking healthy and “sweet” (code word for f-able) but with a big stomach; and he said his preference was for the latter. Not that his “preference” had any bearing on my choice to come off the juice fast early.

What happened was I had a really bad day on around day 14 or so and I medicated with food. I intended to forgive myself for that self abuse and resume the juice fast the following day but then I decided it was prudent to stop doing the juice fast until I had the money I needed to afford to do it right. The way I was doing it I was not getting enough calories to prevent the weight loss because I couldn’t afford to spend $20 per day on juices. Unfortunately that also meant going back to eating the same foods I was eating before I attempted the juice fast because I also could not afford the kinds of foods I needed to be eating on a daily basis to maintain the results from the juice fasting.

Needless to say, my fibroids have toughened up again and I probably could not get away with going out in that t-shirt at this present moment. Here is the promised picture that shows the progress of my efforts at shrinking fibroids naturally from June 2011 – August 31 2012. 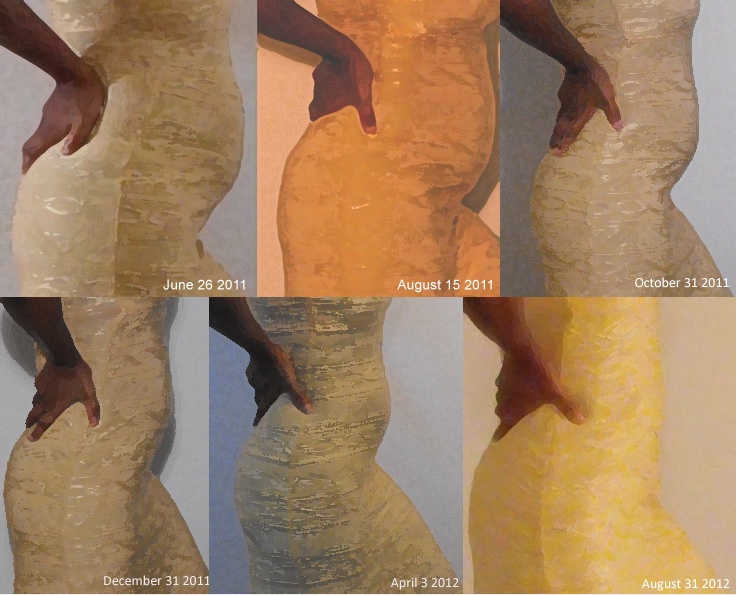 If you go by the picture above you’ll probably draw the conclusion that shrinking fibroids naturally is possible,  and you’ll think there must be something wrong with me for still not being able to say with conviction that my fibroids have shrunken.The thing is, I have the ability to actually prod my stomach with my fingers so I know what things feel like in there despite what the pictures suggest.

I’m not going to dispute that my stomach is flatter; and I do believe without a doubt that my fibroids got less dense during the 21 day juice fast which I guess I should call a 14 day juice fast. When they were less dense they had a less prominent place in my stomach so there was less protrusion. I could actually feel other components of my abdomen like I mentioned in another post. I was more physically comfortable. I could breathe more effortlessly. I got a chance to remember who I was before this assault on my body; but the fact that after just a couple of days eating normally the fibroids were thick and prominent again suggests to me that loss of density does not equal shrinkage. (appended October 17 2012: I just read this and realized that technically loss of density would equal shrinkage so I want to clarify that what I mean is that loss of density does not mean the fibroids have gone away and your battle with fibroids has been won.)

Maybe eventually, if you stay long enough on a program that deprives the fibroids of what ever makes them maintain their throbbing density, they can become looser and looser until they become like shriveled up prunes that you’d have to make a damned and determined effort to revive. That’s going to be the key to shrinking fibroids naturally I think–consistently maintaining a control and management program for a long enough period of time if not for the rest of your life. I haven’t quite gotten there yet mostly because I can’t really afford (financially) to make the change that is necessary; but I have absolutely no complaints about the progress I have made so far.

How exactly do you make raw chocolate cake and does it look or taste like cake?

An update on status of my efforts at shrinking fibroids naturally

An update on status of my efforts at shrinking fibroids naturally