Shrinking fibroids naturally before and after photo comparison

by Monica
in Journal
6

I haven’t written an update on my progress in a while. I still have fibroids and I still don’t know if they can really go away by eating this or drinking that or by taking this or that supplement. I’ve been trying to shrink mine since I was told in December 2010 that mine were too big and my uterus too large for me to avoid a hysterectomy. I was told my situation was urgent, but there was nothing I could do about it because I didn’t have money to afford surgery and I still don’t have health insurance. If you’ve already read about this in my previous reports I apologize for repeating it. I’m repeating it for the benefit of anyone who hasn’t read any of the other updates. Below is a picture of where things stand with me and my fibroids.

As you can see there’s not much difference between the picture I took for my update on December 31 2011 and the picture I took a few minutes ago for today’s update. In fact, in today’s picture it might look as if my stomach protrudes more than in December but that is not really the case. The position of the fibroids have shifted. My stomach is not as round all over. My lower pelvic area and my upper rib area are protruding less so there’s more of an incline giving the appearance of a bigger protrusion. This is actually a good thing because I can see more of my shape now. 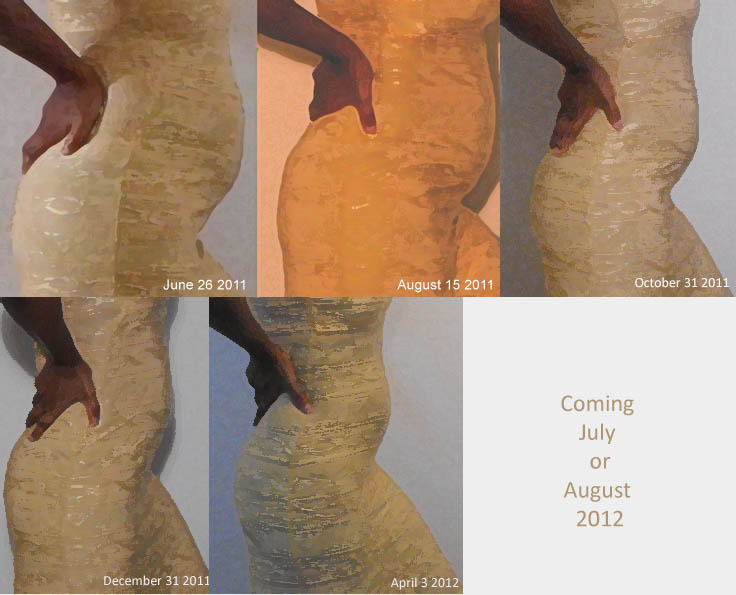 I never did keep my appointment at the clinic because I didn’t have the money to pay for the appointment. That means I don’t know what the real situation is as far as what size my fibroids are now. I know my stomach is smaller but that doesn’t mean the fibroids are smaller.

Right now what I’m doing in my ongoing process of trying to shrink them is practicing a five day fast at the beginning of each month and doing meditative stretching during and after this 5 day fast. The 30 day juice fast suggested will not work for me but maybe it might work for you. I spent most of my life being very skinny and only after gaining weight when I started battling hormonal issues at age 35 did I learn to appreciate that I had been way too skinny. I have no desire to go back to that emaciated size and 30 days without substantial meals will put be back there. Also the risk of redeveloping the eating disorder that allowed me to stay under 100 pounds for so many years of my life isn’t one I can afford to take. So I’ve come up with a program for myself where I do a tea fast 5 days per month and incorporate that with the meditation/stretch. On the other days I try to eat as well as I can on my budget and I workout at least 5 days per week and include some meditation and stretching when I have enough left for an extra 30 – 60 minutes of it after doing the cardio and resistance stuff. I do have my spells where the fibroids seem to get bigger. It happens at that time of the month and it also happens if I go a few days not paying enough attention to what I’m eating, but the fasting seems to reset it.

I’ve seen so many different things out there, so many different people saying this works and that works. Most of these people have something to sell. I can’t afford any of the products that are claimed to work, so my hope is that I can maintain what I’m doing with the program I’ve created and that by August when I take my next comparison photo, there will be even greater improvement in my condition. I’m at a point where I don’t think getting rid of the fibroids altogether is possible without removing them whether by hysterectomy or some other procedure, so I’m resigned to trying to get my body to where I can still look and feel good even while I have fibroids that have changed the shape of my body.

If you’re battling fibroids I wish you all the best with shrinking them. If you’ve tried something that has worked for you please share it as there are so many people out there who are dealing with this problem and not everyone can afford to pay for information and pay for pills or books or whatever else is out there being sold. If nothing else, share your story because we might find enough common things to lead in a direction where that aha moment can happen and the factual cause of fibroids can be figured out and a way to shrink and prevent them found. We’re luckier than a lot of people because our tumors are not malignant; but fibroids are still a health problem that cause difficulties for sufferers and it doesn’t seem as if much has been done to try to find out what really causes them and what can be done to get rid of them or prevent them without having to remove part of a woman’s body, whether it’s a part she needs or not. There’s just too much conflicting information out there and the bulk of it from people who are not medical professionals. If fibroids can be shrunken naturally why doesn’t the medical profession know this? There are individual doctors out there selling pills that they concocted which they say will shrink our fibroids. If they can come up with fibroid shrinking pills why don’t our doctors have fibroid shrinking pills for us which they can prescribe? Are the ones who claim their pills will shrink our fibroids lying to us? Or is it that the powers that be don’t consider fibroids important enough to invest time and money into developing a pill when they can just take our uterus out, get $10,000 from us whether out of our pocket directly or from our insurance companies and be done with it?