Over 40 poor black woman with fibroids

It’s been one helluva day. I got disrespected in so many ways by so many different people today. It started when I got into a cab this morning. I said good morning to the driver. He replied with a rough “Yeah”. He then proceeded to turn to my husband and ask “Does she speak English real good?” My husband looks Mexican so it is generally assumed he’s Mexican and certain types will assume based on his appearance that English is not his native language. He’s from Barbados. English is the only language he speaks; but given his appearance and people’s tendency to make assumptions, and given his poor communication skills, I guess it makes sense that people might think English is not his native language. I on the other hand am black. There is nothing about my physical appearance that would cause someone to assume I do not speak English. I did not mumble “good morning” upon entering the cab. I spoke very clearly and I speak very well. My English is excellent. There is no way that my “good morning” could have led this cab driver to the conclusion that I did not speak English. Furthermore, why are you going to ask my husband if I speak English? I’m sitting right there. WTF? Anyway, the husband treats me like so much nothing himself that he saw nothing out of the ordinary. He didn’t even realize that I was royally offended. He couldn’t have cared less one way or another. He even tipped the cab driver once we got out of the cab. But whatever.

I had started the day dreading having to go out; but the husband was having eye surgery and my son and I had to go with him because he had to have someone there with him. Being out in public is difficult for me. It was going to be tough no matter what but that situation with the cab driver made things worse. And then, after I asked my husband how he could tip the man after the man was so disrespectful to his wife, things just got that much worse. He took an attitude as if I was carrying on over nothing. I said to him that I know people like the cab driver. To people like him I’m just an n-word woman. Still nothing but jumping to the cab driver’s defense. “No, honey I don’t think that’s true.” Trust me when I say that all the cab driver saw was an N-word woman and the fact that my husband was talking to this man while we were in the cab and then tipped him when we got out, well, it speaks volumes. Anyway, I couldn’t very well make a big stink given he was about to go have surgery; but I couldn’t pull myself together. So I stayed angry throughout the entire experience of being at the hospital.

Then on the way home a female driver picks us up in a cab that reeks of cigarettes. She has conversations with the husband. She has conversations with the son. Not that I wanted to have a conversation with her but it was pretty obvious the intention was to disregard my presence. Lady even touches the husband to thank him for putting the bags that were on the seat on the floor in front of him when he got in the car. Whatever. I get that all these people see is just a black woman and they have their preconceived notions about black women and unless I’m riding in a limo dressed in Chanel as far as they’re concerned I’m every other black woman, which is to say I am nothing (to be clear I am not personally saying that I am nothing, although I will admit to having my own struggles there. I am saying that to certain types, including some other black people, black women, particularly black women who subsist at the lower end of the economic ladder, are considered nothing.)

That is all well and good. I don’t need these types of people to validate me. I don’t care what these types of people think of me. It’s not their sh*t that hurts me. It’s when my own husband and my own son allow them to do it and get away with it. That’s when I start to feel like jumping in a lake, not because I hate myself but because I love myself too much to want to be part of a world wherein I can be treated like this and have no defense against it. I am feeling like all I am is an over 40 poor black woman with fibroids. And what that means is that when you add things up using society’s point system for measuring human worth, I am worth nothing. Over 40 = worth nothing. Black woman = worth nothing. Poor = worth nothing. Have fibroids and look pregnant = worth nothing (because a woman is worth how much or how little sexual interest her figure generates).

And the worse part is that I have no support system. There’s no one who understands to whom I can turn and cry if I need to or rant if I need to or go out with and enjoy my life with and say to hell with all these people. Let them view me however they want to view me. I’m still going to live and I’m going to be happy doing it. I don’t even have that. So yeah, I kind of feel like going and jumping in the lake or throwing myself in front of a car right now.

This is a digitized version of a painting I created back in 1999 during a difficult time in my life. I sat on a bed and looked in a mirror and painted myself. I made myself blue and gave myself no face. I titled the painting “Faceless”. 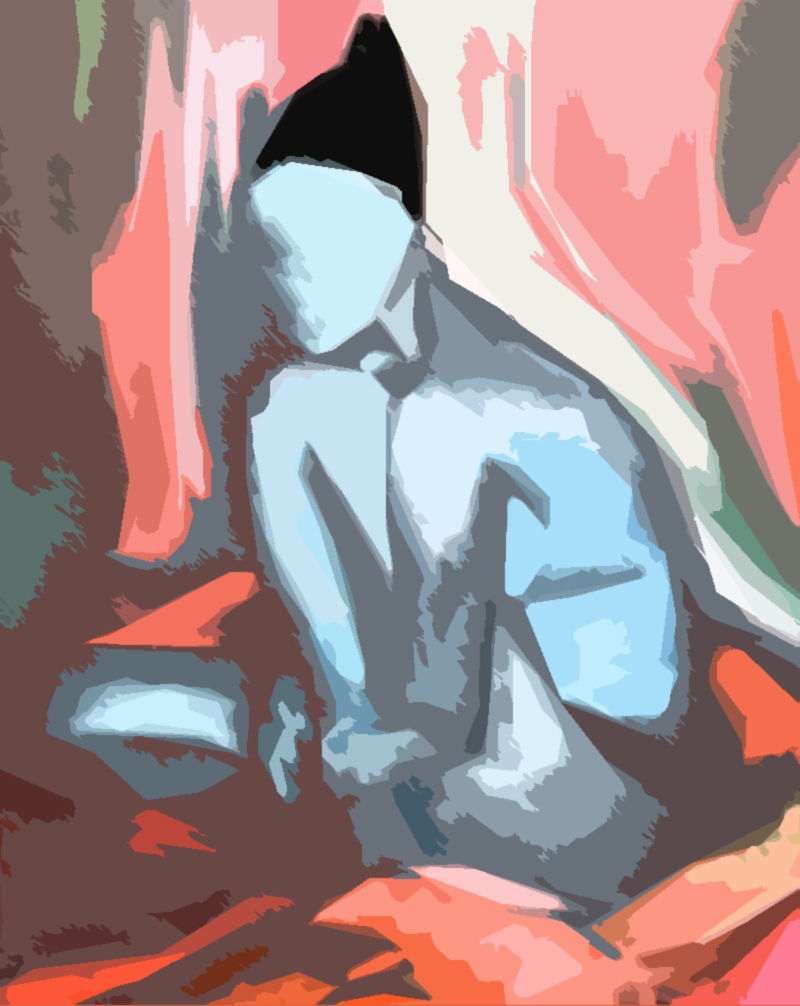 It was supposed to reflect how I felt–like I was a body without a face, specifically to men. These days I am still a body without a face but it’s different now. Now the body isn’t desired by men. The fibroids have made me not sexually appealing. But I am still seen. It’s just that I am seen as just as another worthless black woman for people to cast their eyes on with scorn. My face is the face of every scorned black woman, particular those over 40.

My thoughts as I sit alone at 1:21AM Thursday

My thoughts as I sit alone at 1:21AM Thursday