You’ll grow a fibroid worrying what people think about you

It’s been a long day. I am sitting here trying to get a grip on myself. It’s not proving easy. My mind is wandering all over the place. I guess I’m feeling a little unhappy; but I’m trying to put things in perspective. I’m trying not to let the feeling of unhappiness sink deep enough to into my soul to break me. It is proving very difficult to stay on this course of trying to transform my life. In fact, if I were to be honest, for the last few days I’ve only been talking about the course. I haven’t actually been on the course. I fell off and I haven’t managed to get back on yet. I have too much going on.

Right now I am a little bit distracted thinking about a lot of little things that really shouldn’t be causing me any distress. Today a friend of mine asked me to setup a skype account so that we could discuss a business matter via a video call; but I had to decline to do a video call because I’m just not comfortable with the idea. We had some email exchanges about it. He thought I was being silly. I tried to explain my position–why I felt the way I did; but I don’t think I was successful in getting him to see where I was coming from. I think he remained with the mindset that I was being silly; and that’s fine; but even so, I’ve been thinking about it all day. I guess you take a risk when you try to explain yourself to someone. It’s something I always try to remind myself not to do; and I’m a lot better at it than I used to be, but I still slip up. The thing is,  people are going to see things the way they see things no matter what you say or do; and especially when it comes to your personal hang-ups, don’t expect people to be patient and understanding for however long it takes you to get over your issues, or forever if you never get over them. It get’s old for them. They get tired of you. I guess that’s what’s been weighing on my mind–the thought that this person finds me tiresome and has reached a point where he simply has no interest in continuing to be bothered. But if that’s the case there really isn’t anything I can do about it and I need to accept that.

There were also a number of other things that happened today that have detrimentally affected my mood. It can be hard to “be” sometimes because you feel like everybody has a problem with who you are. You have to play these roles in order to avoid rubbing people the wrong way. I’ve been quiet my whole life. There was a time when I thought it was because I was vapid and I had no thoughts, and I had nothing to say. But in reality I think very deeply. I guess I just realized early in life that people don’t generally want to hear anything I have to say. I have always been self conscious to speak. Even in a family setting I couldn’t speak freely and openly. Whenever I did speak I was more often than not left feeling embarrassed. I always got a feeling like I was regarded as being rather stupid. It’s something I never got over. More often than not I am by myself in my little corner. I don’t speak much to anyone. There is still that sense of having nothing to say that anyone wants to hear. Sometimes I feel like I’m an alien when I speak–like I said something so farfetched and out of this world that it just boggles the average earth person’s mind. And sometimes I feel like the things I feel most strongly and most passionately about are things with which the people I would speak to don’t agree, and they judge me and dislike me for my thoughts and my feelings. Some of that is what’s going on right now. I’m feeling like the heart and soul of me are the parts of me that rub people the wrong way and it becomes very difficult not to doubt myself and question whether I have any substance, any intelligence, or any purpose.

Dear Monica, you sad little thing. Breathe. Or cry. Do one or the other but let it get out from inside you or you’ll grow another fibroid.

**The image used with this post was taken last week expressly for the purpose of creating a digital painting from a photo of myself dancing without trying to hide my fibroid belly . I titled the series of paintings I created from the pictures I took “Woman Weeping”. Here’s a second image from the series 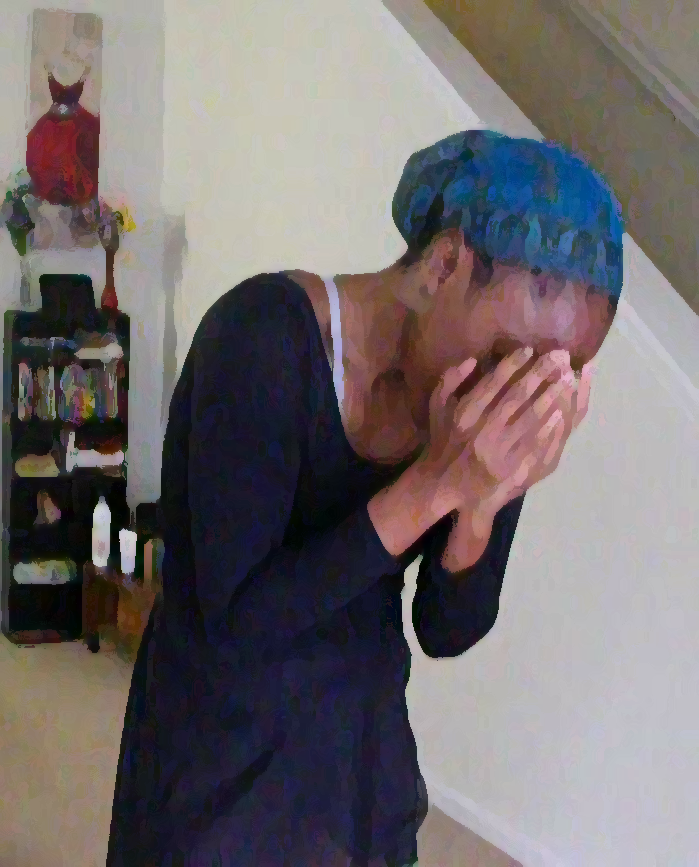 Fibroids will thrive as long as life remains out of control